skip to main | skip to sidebar

Every 15 minutes in this country another person is hit, injured or killed by a drunk driver.

Be a Walker & help us help MADD save precious life. We formed team, ‘Ian Kinney’s Family and Friends’ & walked the walk to end drunk driving for the 1st time in September 2008…two months after our 19 year old son, Ian Kinney was tragically killed by a drunk driver.

At this year’s walk with your help, we hope to raise $1500 for MADD’s crusade to eradicate these 100 % preventable injuries & deaths. The money we raise helps heighten awareness of the life and death realities of drunk driving.

Walk with us in a show of solidarity for the memory of Ian & all victims.

We would like to thank all of you that have been involved and will be involved in ‘Walk Like MADD San Diego’ with your presence or donations. Your love and caring means the world to us!

Debra and Scott Kinney
Posted by The Kinney Family at 10:28 PM No comments:

The Maximum Sentence Handed Down For Ian Kinneys Killer

On the morning of January 8, 2010, almost 18 months after killing both our 19 yr old son Ian Kinney and Joseph Edwards and horribly injuring Ian's girlfriend Tessa Maderis in a drunk-driving crash, Judge Herbert J. Exarhos sentenced Shannon Kelly Shimp to the maximum sentence possible for his crimes, 16 years. Shimp will have to serve at least 85% of the time... a minimum of 11 years in prison.

Shimp, 36, was convicted of two counts of gross vehicular manslaughter and driving under the influence causing death or injury to 3 persons after a trial in September. Shimp was intoxicated ( .19 ) and had methamphetamine in his system when the flatbed utility truck he was driving with reckless and depraved indifference, spun out of control, launching and crash-landing on top of Ian's 1996 ES 300 Lexus, on a stretch of Hwy 78.

Tessa said, "I went through the most horrible thing anyone should ever go through. I had to watch my boyfriend die in front of my face, not being able to do anything about it."

Ian's mother, Debbie and I, Ian's two brothers Derek and Jacob, both sisters-in-law Chandra and Katie, his uncle Steve and others addressed the court before sentencing. "How many people have to be killed before our laws change to protect these innocent victims? Why do we have a 'War on Terror', a 'War Against Drugs' and not a War Against DUI Murderers? We lose more people in this country to the thoughtless actions of drunk drivers than we do in our war in the middle east." Pleaded Debbie.

I told the court, "Ian was our baby, youngest of three sons of which we are very proud. Ian was 14 when our home burned to the ground in the 'Cedar Fire'. Ian worked beside me summers and weekends as we rebuilt our home becoming a skilled carpenter and a fair electrician. He had just been accepted into a union carpenter apprenticeship program days before his death. He also looked forward to continuing his higher education. Never more.

Ian's legacy will be his warm smile and easy laugh, his kindness to strangers, loyalty to friends, his willingness to offer his hand to make our burden lighter, his good natured and spirited horsie-back-rides with his young nieces, his self-deprecating humor and love of family... a fully fledged humanist: a person with a strong concern for human welfare, values and dignity."

Shimp was unfortunately acquitted of the more serious charges of two counts of second degree murder. "I'm just so very sorry," Shimp said in court. "If there was anything I could do to make things right, even if it meant give my life for theirs, I would do it in a second."
Shimp's father also spoke, directly to our family, he asked for our understanding, that he was ashamed for the actions of his son of that July evening. The judge called it genuine remorse. "Still", he said, "it does not change what happened that night."

We very much appreciated the opportunity to speak to the court and Shannon after months of sitting silently in the courtroom. It felt right to get some things off of our chest and onto the record. Does any of this bring back, Ian? No.
But, Ian knows we as a family and community vigorously supported the strident prosecution and ultimate sentencing of his murderer.

To all of you who attended endless legal hearings and trial proceedings, thank you so much for your strength, love, support and encouragement. May, Ian Rest in Peace.

Sentencing will be Friday January 8, 2010

Not Guilty Verdict for Murder

We are extremely disappointed to report that Shannon Shimp was found not guilty on Friday of 2nd Degree Murder of our son/brother Ian. He was however, convicted of two counts of Gross Vehicular Manslaughter (for Ian and Joseph Edwards), causing great bodily harm while under the influence (for Tessa Medearis), and driving under the influence. We are hearing different numbers as to the maximum sentence that Shimp may receive with these charges, either 17 or 24 years. This is much less than the potential life in prison that Shimp may have faced if he had been convicted of 2nd Degree Murder.

In an interview with 10 News Friday night regarding the decision the jury foreman stated "we did not feel that the driver at the time intentionally comitted murder." Obviously nobody believes that when Shimp drunkenly put his key in the ignition that evening he was planning on killing Ian and Mr. Edwards on the ride home. This would be "expressed malice," in which one has a deliberate intention to unlawfully take away the life of another. However, a 2nd Degree Murder conviction can result if it is believed that the killer was acting with either expressed malice or "implied malice." We can only assume by the jury foreman's statement that the jurors misunderstood the definition of the implied malice finding that was required to reach a 2nd Degree Murder conviction in this case. Implied malice is found if:

2. The natural consequences of the act were dangerous to human life;

Shimp drove his truck to Molly Malone's to drink (they were not serving food) and intended to drive afterwards. We believe that Shimp, like anyone else, was aware that driving his utility truck with Methamphetamine in his system and a .22 Blood Alcohol Content (his BAC at the time of the collision) was dangerous to himself and others and had the potential to cause loss of life. Furthermore, Shimp knew that it was dangerous for him to drive as he had been cut off by the bartender for being too intoxicated and was warned not to drive. Shimp's decision to drive in this extremely intoxicated state (nearly 3 times the legal limit) anyways showed a conscious disregard for human life in itself, let alone the addition of his wreckless driving which included driving on the wrong side of double yellow lines and passing others on blind corners. On top of all of this he was driving on a suspended license and had no insurance.

We feel that all of the requirements for a Murder 2 conviction were present in the case of Ian's death and we are having a very difficult time understanding how this didn't come to be. Shimp did not offer Ian a second chance when he careened into his lane sideways in his 12000 pound utility truck and crushed him, but with this verdict the jury has said that Shimp deserves one. We disagree.


Below are links to a few of the many news stories that have aired recently.

The trial began Tuesday 9/08/2009 with jury selection. By early Wednesday afternoon a jury had been chosen and the first witness was called. Thursday more witness testimony; it is possible that all witnesses will have testified by next Tuesday. The judge has forecast a two week trial.
Posted by The Kinney Family at 12:21 AM 1 comment:

This morning the last of the pretrial hearings ended with a judgment allowing a video prepared by the DA's office to be entered into evidence. The video is from a drivers perspective traveling to the collision site on Hwy 78 from both East and West directions.

This was the last huddle before the trial; which will begin Tuesday, September 8, 2009 in department-17 at 9am. We understand that the trial could take up to two weeks. The first day or two will be spent seating a jury. No court Wednesday, September 16.

Please feel free to attend any day of the trial to support the DA's prosecution of Shannon Shimp.

Thank you for your support in Ian's memory. Ian's family
Posted by The Kinney Family at 2:11 PM 2 comments:

The next Motions Hearing is Thursday August 27, in Department -17 at 9am.

The trial is Scheduled to begin Tuesday September 8, in Department-17 at 9am.
Posted by The Kinney Family at 12:08 PM No comments: 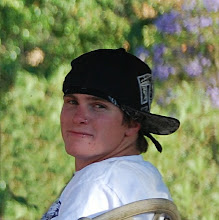 The Kinney Family
Julian, San Diego county, California, United States
We are the family of Ian Kinney. He was our son, our brother, our uncle, our brother-in-law and to all a best friend. He is deeply missed.